This coming spring Nick Bullock and I will be heading back to Nepal and the Hinku Valley for an attempt on Kyashar, 6769m, via the stunning and unclimbed South Pillar.  This will be my second attempt on this eye catching line after an unsuccessful trip last autumn.
Nick and I first set our eyes on Kyashar (then known as Peak 43) in 2008 when we were in the Hinku Valley to attempt a new route on Peak 41, an expedition which was cut short when we had all our base camp stolen.  Walking up the Hinku Valley we kept getting glimpses of this stunning distant peak through the afternoon cloud, drawing us in.  Kyashar dominats the Hinku Valley, standing proud over the village of Tangnag, named after the lower black rock buttresses of the peak.
The first and only recorded ascent of Kyashar was in 2003 via the west ridge, although it is likely there was an unauthorised ascent prior to it coming onto Nepal’s list of permitted peaks for climbing.  The South Pillar has seen three attempts so far including last years, the first two from strong Czechs teams which started up mixed ground below the upper pillar.  Last autumn there wasn’t any visible ice so Tony and I approached the upper pillar by climbing the rock buttress, covering a lot of ground up to HVS with some very loose rock.  Time will tell which approach Nick and I take in the spring.
We were both really pleased to hear last week that we had been awarded the 2011 Nick Estcourt Award for our expedition and would like to thank all the trustees of the award for their generous support.
We are still seeking further funding for the British Kyashar Expedition 2011, any companies or organisations interested in an unique opportunity for exposure and publicity in the outdoor market please get in contact for further information on the expedition and marketing potential. 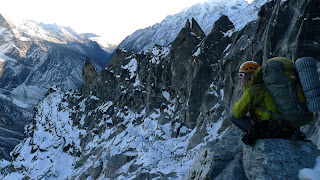 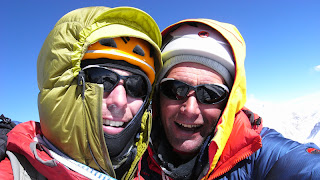 Andy and Nick on the summit of Chang Himal
Posted by Andy Houseman at 17:21