We headed over to the Cairngorms on Wednesday morning for navigation practise up on Cairngorm plateau and a days climbing on Thursday.  After a prolonged coffee and bacon butty stop in Aviemore we wandered up to Coire an Sneachda and up onto the Cairngorm plateau via Fiacaill Ridge.  Conditions on the plateau were great for walking around on with firm snow everywhere and after visiting various practise navigation point we ended up on the top of Ben Macdui to be treated with an amazing brocken spectre.  Our plan of getting some night nav in was curtailed by a stunning full moon that lit everywhere up like day light...
On Thursday Derek and I headed over to the Loch Avon basin, originally we’d wanted to go and do Sticil Face on Shelter Stone although this aspect of the Shelter Stone was very white (the steeper lines are definitely black) the ice on the crux corner wasn’t there.  We opted for Guillotine on Carn Etchachan, looking across at it we’d been a bit dubious about whether it was white enough to be in condition but once on it was fine and gave three great pitches of climbing.  The atmospheric second (or third if you do it in four) pitch giving the route it’s name as you feel like you’re tunnelling into the mountain with the ‘guillotine’ a massive blade of rock, hanging above you followed by a short crux pitch to finish off.  We saw another team at the top that had climbed Scorpion and reported good conditions with a spicy top pitch and another pair starting up Route Major which looked in good condition too.
Elsewhere in the Loch Avon basin Hell’s Lum looked to be quite icy although The Chancre wasn’t touching down.  The Cascade was forming but the start was very thin and had melted out by the end of the day, the rest of Stag Rocks was very black.  A few photo’s of the crags below.
Yesterday we went out with Blair to pick his brains whilst he was doing his avalanche forecast for the SAIS in Creag Meagaidh.  The low cloud meant we didn’t get a good look at the crags to see what ice had survived the thaw but we did see a team starting up South Post Direct and one on The Pumpkin. 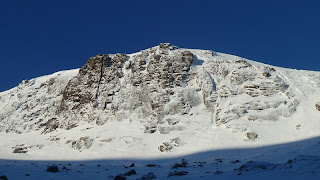 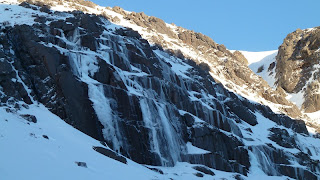 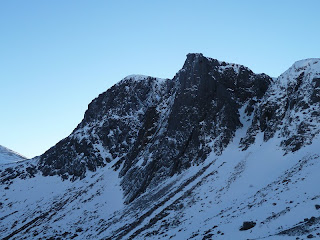 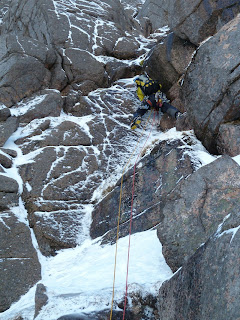 Derek on the first pitch of Guillotine 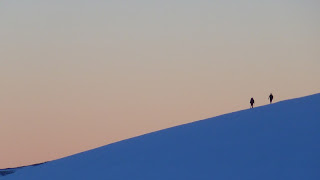 Climbers returning from Hell's Lum
Posted by Andy Houseman at 09:58