A week of entertaining failures

It started on Tuesday when Di and I headed over to the north-west and Beinn Eighe. We’d planned on doing Kami-Kaze on the Far East Wall but were stopped well before we even reached the plateau when we both ran out of patience wallowing through deep unconsolidated snow up the side of Beinn Eighe.

Round two with Beinn Eighe was with Nick on Thursday which turned into a very amusing ‘mini-epic’. Blood, Sweat and Frozen Tears was the aim for the day and with slightly more consolidated snow and some old tracks to follow we even made it onto the summit plateau this time.

We found the abseil point ok and Nick headed down, 15 minutes later the rope was still tight and I could hear some muffed shouts emanating up from below. Wandering round to get a view of the wall from the top of Central Buttress we figured he was off route.  On a ledge but unable to find a decent anchor Nick decided he’d untie from the ropes, let me abseil down, find the correct anchor, pull the ropes, continue the descent and pick him up on the way past.

Sounded great... I found the well used abseil anchor, pulled the rack up from Nick, backed it up and started pulling the ropes. Then the inevitable happened, just as the end of the rope goes out of sight above me they jam.

'Umm, this could get quite interesting' was an initial thought after shouting a few choice words up at the ropes to no avail.

So I was on an anchor with 30m or rope and Nick was somewhere below me on a ledge with no rope or rack, great! After a brief conflab the knife came out, brand new Tendon rope got chopped and I just made it down with the remaining rope to an anchor Nick had spotted to his right on the girdle ledge. The rope pulled this time and I managed to throw a rope to Nick who reacquainted himself with some caving techniques and grovelled over to me.
As with all these sort of situations we found the light hearted approach worked best, ignore the seriousness and have a good laugh about it (it’s blood, sweat and frozen tears not bagels, must have had food on the mind...):
We tied the rope off and abseiled into West Central Gully, down climbed this and then slogged back up Fuselage Gully to our kit and retrieved the stuck rope from the top. Didn't like leaving a rope littering the crag but Nick managed to get back across on Saturday to do the route and retrieve what we’d left. 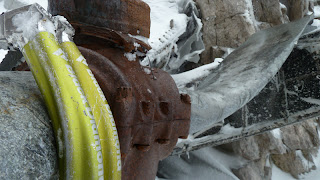 Trying (and failing...) to be artistic with ice tools and the Lancaster
wreckage in Fuselage Gully
Roll on Saturday and one last attempt to grab a winter route. Andy Sharp and I made an exhausting post holing approach to Shelterstone to climb Citadel which we thought might just have been in condition. Unfortunately it looked from the approach that the top was probably going to be black but we started up with open minds to see what we found. 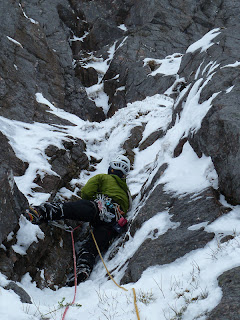 Andy starting up the second pitch of Citadel
After the lower crux, which is really fun steep climbing on bomber hooks and torques, it was pretty obvious the meltdown had set in, water was running down the rocks everywhere and turf wasn’t exactly frozen anymore. Yes there was snow on the ledges but it was far from wintry enough to justify continuing up the summer line. Decision made Andy quickly took us out via the top of Sticil Face in a monster 120m pitch and we started the final post holing mission back across the plateau.
Posted by Andy Houseman at 12:39