It's still snowing and the ski road closed with almost 3ft of snow up at the Cairngorm ski centre, definitely looking like a ski day tomorrow if we can see anything. I've been meaning to post for a while about a couple of bits of gear that I originally got hold of before heading out to Nepal last Autumn but have found just as useful up here in Scotland as above 6000m in Nepal. This may look like a bit of a plug, it probably is but it's genuine kit that I believe in and have found to work very well.

The first as the Adidas Terrex Pro's a modular glasses/goggles combo.  Ok so you're probably not going to use these for walking down the high street but in the hills they are awesome.  Maybe it's because I liked to play with Lego all those years ago that I love these so much, they're like a pair of Lego sunglasses, fully modular so you can build them up how you like.  It would take me ages to explain every feature of them so just have a look at their web site for all the finer points.  This modular design also means if you sit on them or wipe out and land on your face, as a friend discovered when he caught an edge skiing, they break where they're meant to and you just pop them back together rather than having to get the duck tape out and do a botch repair on them.

The thing I've noticed most and what sets them apart from previous glasses/goggles I've had is I actually use them a lot, I've never liked climbing in full goggles or even carrying them for that matter.  But with these I have them in the pack all the time, get them out more often and therefore look after my eyes better, not just protecting them from the sun but as is more common in Scotland the wind and all that dust and grit that is getting blown about in the snow.  For use in the mountains you can get the Space lens which is super dark and they have a nose piece you can attach to give great protection from high intensity sun or strong wind chill. 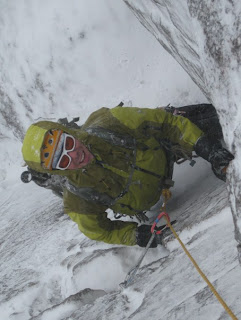 In Scotland with the LST Bright lens (photo-Andy Townsend) 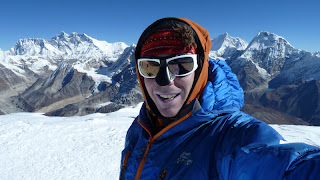 Acclimatizing on Mera peak, Nepal with Everest in the background, Space lens and nose piece

The second bit of kit is socks... yes boring I know but if you suffer from cold feet like I do quite a vital bit of gear.  I knew of Lopren socks from their ski range but had never realised what an extensive range they had until Nathan from the Mountain Boot Company introduced me to them and sent me away with a load of samples to try. The stand out piece for me was the Trekking Expedition model, made from Polartec Powerstretch with a thin layer of Primaloft insulation around the foot bed, toes and ankle. A concept I'd never seen in socks before but all makes for a very warm sock.
Initially I was a bit dubious about them thinking you'd get a lot of movement between the layers leading to a not very precise feel on technical ground. Having since tried them out on quite a bit of technical ground I've found this not to be the case and the only thing you have to watch out for is that you don't get a slight crease under your foot when you put your boot on.

I've used them in Nepal with the Scarpa Phantom 6000's whilst acclimatizing on Mera Peak and an attempt on Kyashar and never had cold feet once, on Kyashar as we were on a south face and they were almost too hot!  In Scotland I've been using them on the colder days with the Scarpa Phantom Guides, they're not for everyday use in Scotland but if you suffer from cold feet or you work in the outdoors and end up standing around a lot they'd be great and also give you the option of using a lighter more technical boot than you normally would in colder conditions.  For both boots I've used them with I haven't found size a problem, i.e they're not that bulky that you'd have to go up half a size in a boot compared with your normal socks.

Warm boots and socks all help towards warm feet but the key factor is a boot that fits well.  If you've got a boot that's too small and you foots crammed in with no movement possible or too big and you have to engage a 3:1 pulley to get the laces tight enough to climb without an inch of heel lift you're going to get cold feet no matter how good the boots and socks are. 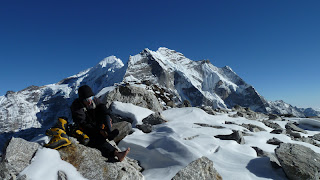 Email ThisBlogThis!Share to TwitterShare to FacebookShare to Pinterest
Labels: gear