Good ice on the Ben

For a bit of a change of scenery on Saturday I changed the East for the West and headed up to the Ben with Paul to get a few pitches of ice in.  We ended up climbing the starting pitches of Hadrian's Wall Direct and the Sickle.  The ice was pretty good on both routes for tool placements but quite a bit of luck digging in the right spot was required for good ice screw placements.  We climbed the Sickle in two long 60m pitches to the easier ground before abseiling back down, the second pitch giving a really good climbing up the corner.  Else where we saw teams on Point Five which looked good and although no one was on it Orion Face looked good too.

Earlier in the week Cat and I had been navigating around the Cairngorm plateau in preparation for her Winter ML which starts tomorrow, and much needed practise for me.  From what we saw Hell's Lum was very icy but the other crags in the Loch Avon basin looked pretty black, although some friends reported good conditions on Route Major over at Carn Etchachan and that the Sticil Face on Shelter Stone looked to have 'some' ice on the crux corner but not as fat as normal.  Snow condition dependant I'm hopefully heading over that way tomorrow so I'll have some more up to date condition info. 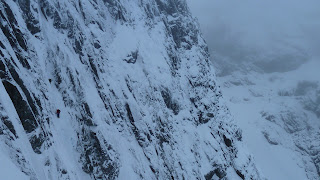 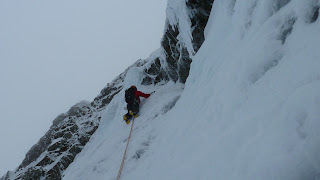 Paul starting up the Sickle 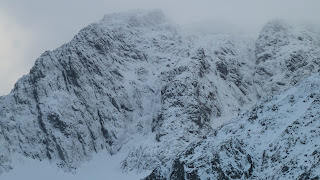