This afternoon we should have being wandering into the village of Tangnag, sitting under the south face of Kyashar, our base camp for the expedition. Instead we find ourselves wandering down to Himalayan Java for our ritual coffee session and brief escape from the hustle and bustle of Kathmandu, the constant beeping of car and bike horns, the sound track of the city, reminding us where we are. 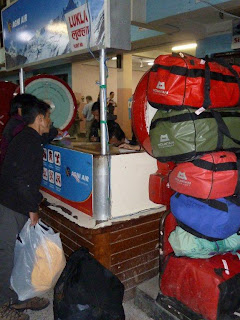 The first attempt at flying to Lukla, only 75kg of excess, let the bartering commence!

Lukla, the small mountain airport we fly to for the start our trek, is quite literally perched on the side of a mountain, 40 minutes of beautiful Himalayan panorama ending with a very ‘exciting’ landing on the short runway with a 12% gradient. With no radar they need very good weather to operate and the heavy rain and snow over the last few days means only a small handful of flights have left. Leaving a massive backlog of trekkers and climbers at both ends, frustration showing on everyone’s face.

We’ve packed and un-packed all our kit three times now for different scenarios trying to beat the system and jump the queue. The only option other than flying is a 9 hour bus ride to Jiri, the start of all expeditions before the airport was built and then an eight day trek to Tangnag. We chose Kyashar because of its ease of access from Kathmandu, three days should have seen us at base camp, the long approach trek isn’t too appealing and already three days behind schedule we’d arrive at Tangnag nearly two weeks later than planned but with all flights fully booked for the week options were running out.

Last night over a beer with Loben (www.lobenexpeditions.com) we came up with a plan, a bit of a gamble but hopefully it pays off. This morning Phalden our ‘guide’ got the early bus to Jiri with most of our kit and will start the trek to Tangnag tomorrow. We’ve kept one bag with us, just about enough kit to try and acclimatize on Mera Peak. The idea being we can get a flight in the next couple of days which will be much easier with just the two of us and only one bag, grab a porter in Lukla and arrive in base camp quite a bit in front of Phalden and start acclimatizing. It’s never a good idea going separating from your bags but knowing Phalden he’ll look after them like his own and won’t let them out of his sight, they’re in safe hands!
Posted by Andy Houseman at 17:03

Email ThisBlogThis!Share to TwitterShare to FacebookShare to Pinterest
Labels: expedition