After six weeks away Nick Bullock and I are slowly negotiating all the security, excess baggage and general airport hassle on our way back home.  Six weeks away for 84 hours of climbing, sometimes I wonder why at times!  But this time there’s no question that those 84 hours climbing the Slovak Direct on the nearly 3000m South Face of Denali, 6194m, were the most committed, intense and memorable climbing I have ever done.

We didn't climb it in a single push or enchain it with another Alaskan grade 6 test piece like some of the previous ascents but for us the atmosphere of the face, the remoteness, the size and the four days of bad weather lead to the most committed and out there route either of us had ever done.  Like all the previous ascensionist (ours was the 6th since the first in 1984) we had an amazing experience on the route which definitely didn't come easy and has left life long memories.

We left 14,000ft camp following the tracks of the two Toms up to the West Rib cut off and joined them for the decent down the Wickwire Ramp to the North East Fork and the start of the Cassin Ridge which the Tom’s then went on to climb over the next two days.  The slopes to cross over the Cassin were looking horrible in the early evening so we decided to bivi there and start early the next morning for the final approach down the original start to the Cassin into the East Fork and the base of the Slovak.   Taking longer than expected by the time we reached the East Fork and brewed up the sun had hit the face and the lower part was transformed into a patch work of wet streaks of melt water running everywhere so we spent the day dozing and waiting for the cooler temperatures of the night.

Midnight came and Big Bertha (the massive serac that hangs over part of the South Face) woke, exploding 1400m above us and had us scurrying down the glacier.  Next the serac above the starting couloir stirs, not again… we watch a small bit of debris come down and decide to get back in our bags for a couple of hours to let things settle.

Eventually at 3am on the 24th we crossed the bergschrund and quickly soloed up the approach couloir to a big long traverse out onto the face proper.  The first day went quickly and after 9 hours of climbing up classic alpine ground and a few steep ice pitches we set up the tent for a luxurious bivi in the bergschrund of a hanging glacier.

Fourteen and a half hours later (the bivi was a bit too comfy…) we left and started the meat of the route.  From the top right of the hanging glacier ice goulettes and mixed steps lead up a depression in the face to the base of a clean completely vertical big wall, the situation and atmosphere of the face totally out there.  Breaking out right a huge iced up corner stretches for 140m through some of the wildest ground either of us had have ever climbed in the mountains, the commitment and size of the face, the quality and steepness of the climbing all made for an awe inspiring situation.
The weather hadn’t been too bad on the previous day, a little bit of snow but nothing too worrying but throughout the morning it had gradually deteriorated.  My block finished and Nick lead up the final pitch of the corner getting hammered by spindrift being whipped up by strong winds above.  Miraculously the sun came out for the crux rock wall and a quick paper, rock, scissors decided who was going to have it, Nick had a proper good effort at freeing it before lack of gear, pressure of time and a distinct phobia of broken bones half way up a 3000m face forced him to lower off, so close!  Returning to Nicks high point with a replenished rack from the lower section, I aided the last few steep meters of climbing and up the final easier section (the way two of the previous ascents had taken).  A couple more pitches and we ended up on the ice slopes with Big Bertha looming way out to the right, hour seventeen on the go and back to strong winds and snow, we simlu climbed up ice slopes and easy mixed ground for a few hundred meters to the final technical pitch of the Slovak Direct.

This should have been a straight forward 70m pitch up a beautiful ice runnel and a great way to finish off the climbing before joining the Cassin.  As it was I’ve never had to dig as deep, well into hour twenty something and feeling the strain what would normally take 15 min of enjoyable climbing lasted an hour and a half, most of it spent trying to hold on in the constant spindrift pouring down, definitely ‘type 2’ fun!

The Slovak was over and 27 hours after leaving our last bivi we’d joined the Cassin.  Using the tent as a bivi sack, too scared to try and put the poles in in the wind we dozed and melted snow before continuing up the final 3500ft of Cassin Ridge aiming for the summit that day.

Deep fresh snow slowed us even more than our tired bodies and the ridge seemed to go on for ever.  At 18,500ft we were forced to put the tent up in winds too strong to continue climbing in.  Eventually sixteen hours later the weather seemed to be clearing and we made a mad dash, well more a very tired and slow trudge up the final 1800ft to the summit, being treated to clear skies, sun and a summit to ourselves at 16.30 on the 27th.
The decent down the West Buttress went fine and we were kindly taken in by a guided group at the 17,00ft camp for some food and drinks before continuing down to 14,000ft camp later that evening.  Six days out, four on the route and the most fulfilling, committing and totally absorbing experience in the mountains I have ever had. 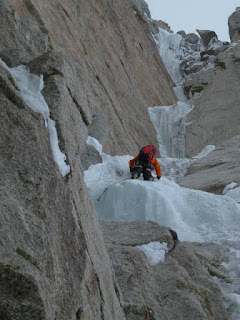