I’ve just got back home (yes Yorkshire is now home, more on that later...) from spending three weeks out in the alps.  For the past 3 years I’ve spent the autumn out in the Himalayas but after coming away from the last two trips empty handed I was pretty keen to get some guaranteed climbing in so Chamonix bound it was.

First up was a trip over to Zermatt with Guy Robertson.  We’d had plans on the Bonatti Direct on the North face of the Matterhorn but standing under the face at 4.30am with a temperature of only -0.5oC wasn’t the most confidence inspiring so up the Schmid it was instead.  Conditions were pretty good on the first two thirds of the face with great neve leading up the ramp.  A slight navigational error and a lot more hours later than expected we eventually arrived on the top.  The Matterhorn is surrounded by rumours of choss and bad or nonexistent gear, was it that bad? Yes there’s a lot of loose rock but if you’re careful there’s enough gear to make it acceptable, small cams being the most useful beta.

Was the climbing good? Well it wasn’t amazing, far from it really but it is the Matterhorn so that more than makes up for it! 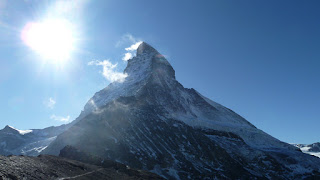 Probably the most recognisable mountain in the alps? 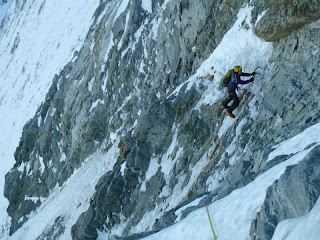 Guy coming up the ramp 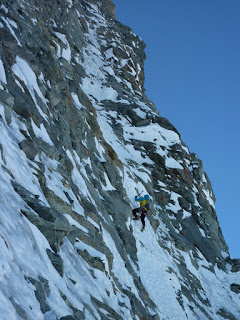 Heading up perfect neve on the ramp 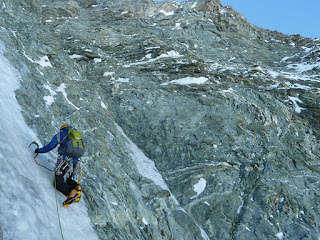 After a slight navigation error from me, Guy starts a big traverse rightwards to get us back on route
(note: at the top of the ramp don't follow the obvious icy couloir leftwards, had we had a guide book it mentions this!) 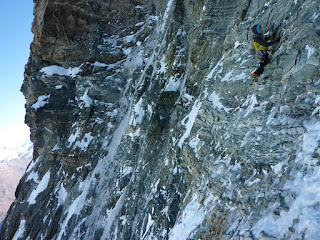 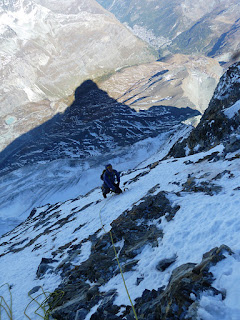 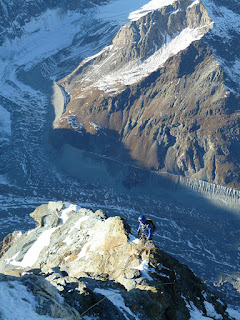 Exiting onto the Zmutt ridge about 100m below the summit 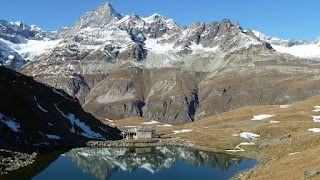 Next up was a week of photos for BD with Jon Griffith and French climber Alex Chabot.  Jon had had a sunset serac climbing shot he’d been after shooting for ages so after bagging that it was over to Point Lachenal for some mixed shots.  Back in the valley and with the autumn high pressure still working it’s magic we were soon heading up to the Grandes Jorasses to try the Gousseault- Desmaison on the left side of the walk spur.  Due to one reason or another, including a dropped axe we ended up bailing up the Shroud instead.  With Alex only having one axe we tied both 70m ropes together to run it out in 140m pitches with Jon soloing alongside taking photos.  Climbing the Shroud this way definitely isn’t the quickest... but it did mean we finished up the Hirondelles ridge to an amazing sunset on the top of Point Walker before a chill bivi a few hundred meters below.

As ever Jon came away with some amazing photo's so thanks for the following. 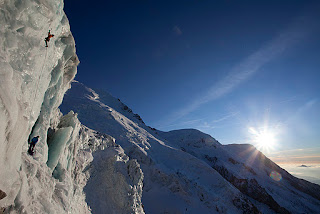 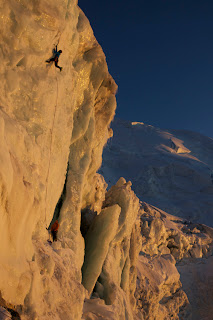 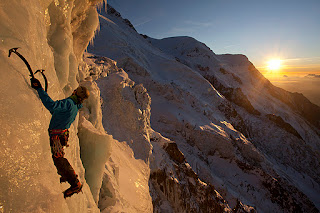 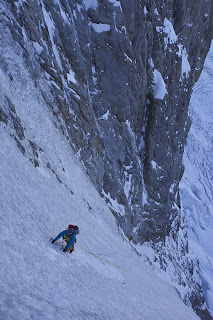 Andy on the Shroud 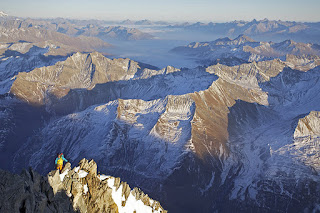 The final section up the Hirondelles ridge to the top 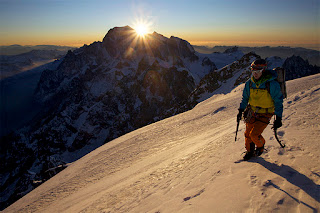 Sunset on the summit of the Grandes Jorasses

After a bit too briefer rest day back in Chamonix Rob somehow managed to twist my arm and persuade a rather reluctant and un-psyched me to head back up to the Grandes Jorasses with the mega classic Croz spur in mind.  Last time up there had been a motorway leading through the glacier to the base of the route however the Foehn wind had put quite a bit of snow down on the frontier so after leaving the Leshaux hut at 2.30am we spent the next 5 hours trotting about completely lost, post holing up to our waists trying to find a way through the crevasse riddled glacier.  I think the getting lost was definitely a joint effort but the trail breaking was definitely mainly down to Rob, well he’s a fell runner with legs twice the size of mine and was definitely feeling the psyche a lot more than me!

Eventually after and hours brew stop and quick power nap (the psyche had returned to both members by now...) we crossed the bergschrund at 08.30 and started up the Slovenian start.  After the approach the route was really enjoyable, with great ice runnels linking the snow fields leading to and exposed pitch up the crest of the spur to just below the summit.  From here there’s two options, either the original finish to the left or the more commonly followed right hand finish.  This year the right hand finish has a couple of spicy pitches which Rob dispatched in fine style and we were starting the raps down the Italian side just before darkness set in.

The lack of photos from the Croz is due to me leaving my camera at the hut, but a big thanks to the Aussies who bumped into some friends at the train station and asked them if they knew an English climber who drives trucks... not too many of them about so the camera founds it way back, thank you!
Posted by Andy Houseman at 10:28